I decided to install Dave Winer's River2 to supplement my usual feed reading. Now that I can access it via its smart use of Dropbox, it should be good for feeds that I don't feel like I need to see every headline.

One of the things I love about River2 is that it's an app that runs in the OPML Editor, which means that it is endlessly hackable and (apropos to this post) you can fix your own bugs.

So here's a bug report. And fix. (Actually, it could be a workaround for a bug in another application, as I explain below).

I immediately suspected that the problem was the communication between the OPML Editor and the Pale Moon browser. After all, there was a major bug for the longest time in Firefox's DDE implementation that required a workaround.

Bottom line: the OPML Editor's DDE implementation expects that the DDE service name is the same as the name of the executable with the filename suffix removed. So, for Excel, the service name is "excel," and for Firefox it's "firefox." But the service name is determined by the application, and the Pale Moon developers decided that its service name would be "Pale Moon," not "palemoon." A simple patch to system.verbs.builtins.webBrowser.openURL resolves the problem.

The function webBrowser.callBrowser expects ddeName to be the name of the executable, from which it attempts to remove the ".exe" suffix. Luckily, if the function is passed any string without an ".exe" suffix, it just accepts the passed string as the DDE service name. 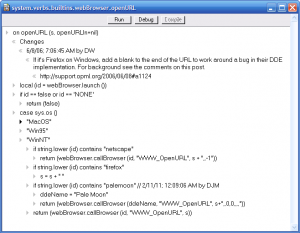 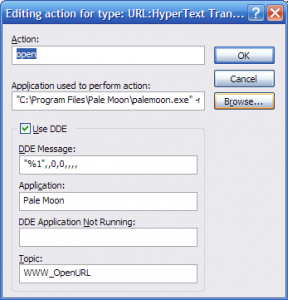