The New York Times is doing a lot of great things with its website and RSS feeds. But somewhere along the way, they've introduced a bug in their code that generates the RSS feed for the home page.

The bug is that the channel title switches back and forth between "NYT > NYTimes.com" and "NYT > Home Page". This alternates at least once an hour, all day long (as near as I can tell). This constant switching causes one of my feed readers (FeedDemon) to alert me of the change every time it occurs. Of course this latter point is not directly the Times's fault, but it is driving me insane.

Screenshots to prove that I'm not already insane: 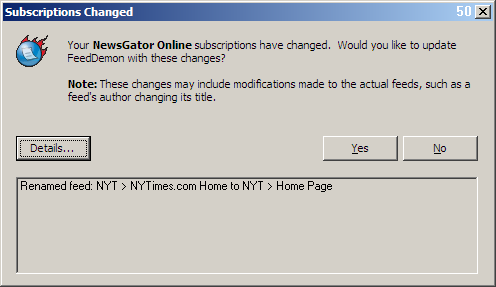 If you look closely at the raw RSS feeds, you will notice that they appear to be using two different tools to generate the same feed. So I guess the two tools are not configured exactly in sync with one another.