By default, Homebrew gets installed under /usr/local. This is great, because it doesn't require you to use sudo to install and upgrade packages. But the downside is that it turns your /usr/local directory into a git repository. If you don't have any conflict with this, then by all means, stick with the default.

I had a conflict. Specifically, I use nave for node version management. Unfortunately, both Homebrew and nave drop a README.md in /usr/local, which means nave frequently modifies a file that's under Homebrew's version control and brew update breaks.

I decided to "move" my Homebrew directory to ~/Homebrew. Here are the steps I followed:

I didn't document this as I did it. Hopefully, I didn't forget anything.

I thought it would be cool to have Fargo as a separate Fluid App. For those who don't know, Fluid let's you make a web app into what feels like a regular desktop app (for Mac OS X only). For me at least, this will make it easier to find Fargo among my many open windows and browser tabs -- now it's got it's own icon in my Dock and it's own spot in the Cmd-Tab switcher. It makes Fargo feel like the first-class Mac App that it is.

If you want to set this up too, know that I had to jump through a few hoops to get it to work. The difficulty appeared to be a by-product of Fargo needing to get my authorization to connect to my Dropbox account (in technical terms, OAuth is a pain in the ass). The workaround was to get this authorization before creating the Fluid App.

Why did that work?!

I'm using a free version of Fluid (for now -- still kicking the tires). The free version doesn't have separate cookie storage -- it shares it with Safari (Fluid is built on Apple's WebKit, like Safari). So, by setting everything up in Safari first, Fluid was able to piggyback on that setup when it created the Fargo app. Neat trick -- but not a long term solution. For example, I want to pay for the full version of Fluid (to support the developer), but I suspect this trick won't work in the full version.

I love the Unix watch command. On OSX, you can install it easily with Homebrew:

Something I didn't realize until 10 minutes ago is that if you want to watch the output of something in your bash aliases, watch will complain because it cannot find the command. This is because watch evaluates the command you pass to it with 'sh -c', which does not expand aliases. However, if you also create an alias for watch itself, aliases will work. So, you can add the following to your .bashrc:

Note the trailing space inside the quotation marks.

In case I need to remember that I did this...

By default, the Mac Terminal assigns the "Clear Scrollback" command to Command-K. This is annoying, because I often use Nano, which uses Control-K to cut a line of text, and I frequently press Command-K instead of Control-K by accident. This clears my screen while I'm in the middle of editing a file. Very annoying.

The solution is to assign a new (harder to hit by accident) command to the "Clear Scrollback" command, so that when I inevitably mistype Command-K, nothing happens. 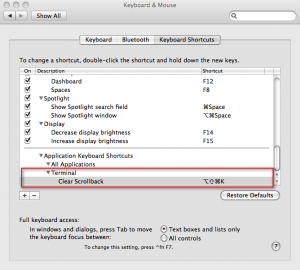